The CICM published a press release last weekend announcing the suspension of 17 signatories from the Prompt Payment Code which the Institute administers for The Department for Business, Energy and Industrial Strategy (BEIS). As one might have expected, it has generated a significant amount of media interest, particularly across trade publications and websites in sectors that are prominent in the 17 organisations.

Historically, the CICM and the PPC Compliance Board have had to face heavy and prolonged criticism about the Code, and the volume of criticism has intensified in recent months. Many have said that the Code lacked teeth, or that it was not as effective as it might be. Our response to those criticisms has always been consistent over several years: action can only be taken when there is evidence of poor practice, and that evidence has only been available from suppliers or business organisations willing to raise a challenge.

Despite repeated calls and commentary from our side, only one trade body or business organisation has ever raised a challenge, even though they are the ones best placed to do so because they don’t have the accompanying commercial risk. While they have been quick to criticise, they have been commensurately slow to actually do anything about it; carping from the sidelines is clearly much easier and helps secure column inches. Ironically, however, it does little or nothing to help those members they represent.

Some suppliers, however, have chosen to raise a challenge themselves. Where they have done so, the Code has achieved significant success including the generation of payments totalling over £3m since 2014. The Code has also led to changes to company processes and procedures, modifications to contractual terms, mediation where views are at different ends of the spectrum, and education of both buyers and sellers in how to improve their trading relationship and employ sound credit management.

Leaving this issue to one side for a moment, one might ask – quite reasonably – why we appear to be suddenly ‘naming and shaming’ companies whose names have been removed from the Code. Companies have been removed historically, but never named publicly, so what has changed?

To answer that, we need to go back to The Small Business, Enterprise and Employment Act of 2015. In it, Matt Hancock, the then Small Business Minister, introduced a requirement that large businesses should publicly report on their Payment Practices behaviour. The requirement was brought into force by the Regulations that came into effect in April 2017 and the process (sometimes referred to colloquially as ‘Duty to Report’ but more formally known as Payment Practices Reporting) is now established. The first reports were submitted towards the end of 2017 and we are now at a point where all large businesses should have published their payment performance. If they haven’t, a criminal offence is being committed and they need to be brought to book.

Where the reported payment record is at variance with the commitments they have voluntarily made (i.e by being a signatory to the Code), we now have a published reference point from which we can make a judgement, without a Challenge having to be raised. We can decide that their names should be removed from the Code unless, and until, they report compliance. This is why 17 have been named as suspended, and more names are likely to follow in the weeks and months ahead.

There have been some hefty responses but the action has been taken based on those companies’ own data. The fact that there might be other equally culpable organisations yet to be named in the same way is no excuse. Some PR companies from the respective firms have asked ‘why us and not so and so.’ That is a false and disingenuous argument. It is like complaining about a parking or speeding fine because others have committed the same offence and not been caught.

Is the Payment Practices reporting perfect? No, far from it. There are certainly examples of businesses that are required to report but have as yet failed to do. There is also legitimate confusion in some cases about what exactly has to be reported, and how, and there are inevitably inconsistencies in the data reported so we might on occasions be comparing apples with pears, and more clarity is required. But – and it’s a big but – the introduction of reporting is a major step forward and has enabled the Prompt Payment Code to look proactively at what businesses are saying about their own performance. The PPC Board did not previously have either the resources or the remit to investigate poor payment behaviour, at least without a Challenge having been raised. Now that has changed, although resource still remains a major issue.

But let’s focus on the positives, and let us remind ourselves – and remind the more vocal commentators – about what the Code is actually intended to achieve. It is designed to change payment behaviour, and to that end, I am delighted to report that many of the named organisations have submitted, or are preparing to submit, an action plan setting out how they will become compliant and thus be reinstated to the Code. Our principal aspiration in removing signatories from the Code is to see payment practice improve in the interests of business and the economy.

Signatories clearly see a benefit in being on the Code; they see the damage that can be done by being removed from it. For this reason, if nothing else, this shows that the Code is working.

I’ve always said there is no silver bullet to resolving late payment. What is required is a change in culture through the use of all the tools at our disposal until we get to the point where paying late is considered unprofessional, irresponsible and unacceptable. The PPC is one such tool.

We’ve made another big step in that journey, and the CICM is pleased and proud to be playing its part. 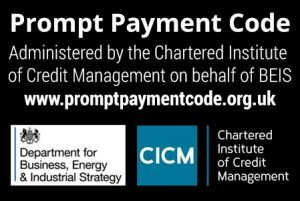