The manufacturing sector is acting as the primary driving force behind business confidence in the UK, according to the latest results (Q1 2017) from the UK’s Credit Managers’ Index (CMI).

The Index – which is the quarterly barometer of the Chartered Institute of Credit Management (CICM) – also reports a reduction in market volatility with overall confidence and business growth in both the manufacturing and services sectors remaining high.

The 1.5-point rise experienced in manufacturing sees it close at 62.7, an all-time CMI high. The result also represents a 3.7-point year-on-year rise and the second successive quarter that the sector has improved. This indicates the positive effect that currency fluctuations are having on the UK’s exporting market since the Brexit referendum.

The CMI’s headline figure, however, has closed down 0.6 points to finish at 59.2. This was primarily the result of a 1.6-point reduction in the services sector, which closed down at 57.5. Despite decreasing, the results – which follow Q4 2016’s increases – are broadly flat. The headline figure, for example, remains above a 59.0-point threshold and marks only the seventh time (and second successive quarterly result) in the CMI’s history that is above this threshold.

The CMI, sponsored by trade credit risk management experts Tinubu Square, is important because it gauges nationwide levels of credit being sought and granted by credit professionals across the UK and acts as a primary indicator of actual levels of business being conducted. It consistently maps the FTSE All Share Index and the EU Economic Sentiment Indicator.

The survey also found that, with the current uncertainties of global economics, almost half (49%) of respondents were using intelligence tools to identify risk against a strategy of extending credit terms to encourage growth. By comparison, only 9.4% said that they were taking a conservative approach to credit management and reducing limits across the board.  When asked if they were being more vigilant about credit management now than during the recession, 57% said it was about the same, a third (31%) were more vigilant but 12% thought the pressure had lessened.

Philip King, Chief Executive of the CICM, says the latest results are encouraging but warns against overconfidence: “Reducing financial volatility does not mean credit professionals should let their guards down and increased vigilance in credit and cashflow is of increasing importance,” he says. “This is especially so with negotiations for Brexit and the upcoming General Election, which could, and probably will, see increasing currency fluctuations that affect our businesses in a variety of different ways.

“Being unprepared for these fluctuations, particularly those that have international portfolios, could see businesses caught out and finding themselves in extremely difficult financial positions,” he adds.

Michael Feldwick, Head of UK and Ireland at Tinubu Square agrees: “The current economic climate is very uncertain and credit managers are clearly turning to technology to help them make informed choices based on current intelligence. This helps them not only to have a clear understanding of the actual economic landscape and how it might impact on their business processes, but to build vital agility into their everyday decision making process.”

The CMI also reports on confidence regionally: Scotland is the only sector whose result falls below the desired 52-point threshold, closing down at 50.8; London remains steady at 55.9; and seven regions (up one from Q4 2016) are reporting results above 60.0, with Northern Ireland’s 68.3 highly commendable bearing in mind its fall below the 52-point threshold in the Q4 2016.

Looking deeper into the CMI’s sector-specific results (it reports on 19 sectors), Banks and Basic Resources are flashing warning lights after both closed under 40.0 points; Telecoms, Retail and Travel and Leisure all reported CMI results of 50.0, which is lower than desired; while 14 sectors reported positive results above 52.0, including Healthcare, the sector leading the CMI count at 70.0.

The CMI is a diffusion Index, producing scores of between one and 100 (typically in a range of 40 – 60). Ten equally weighted factors are included – three favourable and seven unfavourable and the Index is calculated on a simple average of the 10 factors. 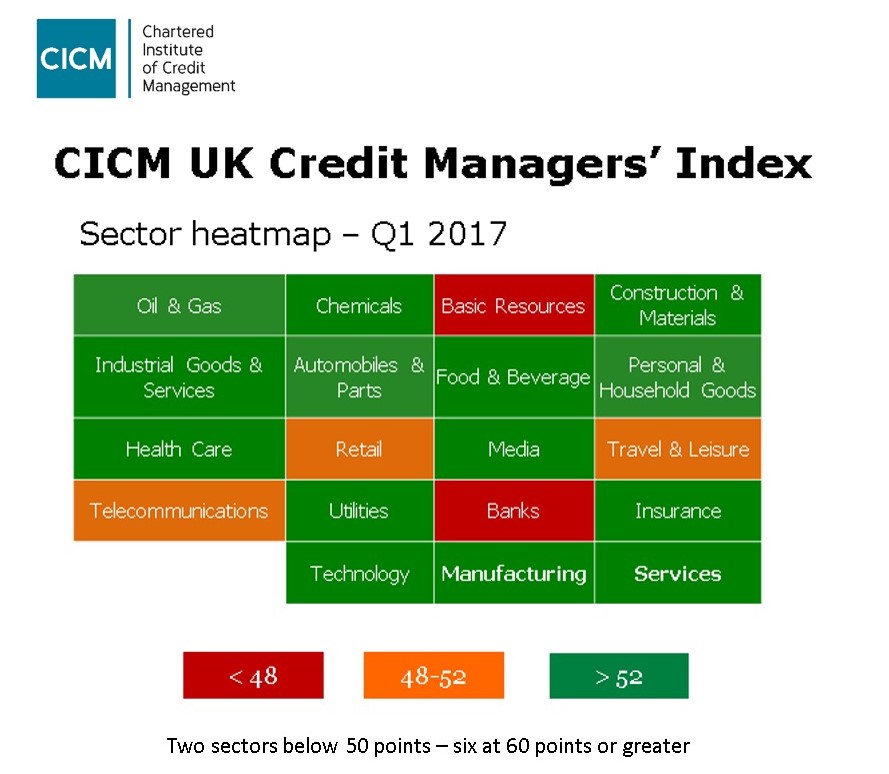 The Chartered Institute of Credit Management (CICM) is the largest recognised professional body in the world for the credit management community. Formed over 75 years ago, the Institute was granted its Royal Charter in 2014. Representing all areas of the credit and collections lifecycle, it is the trusted leader and expert in its field providing its members with support, resources, advice, and career development as well as a networking and interactive community. In addition to its comprehensive suite of qualifications and learning opportunities, events and magazine ‘Credit Management’, the CICM administers the Prompt Payment Code for BEIS. Independently, and through collaboration with business organisations, it provides vital advice to businesses of all sizes on how best to manage cashflow and credit.