More than a quarter of all invoices are being paid late, according to new official statistics, leaving small businesses struggling for cash.

The figures, produced exclusively for the Chartered Institute of Credit Management (CICM) by Graydon, the credit information and data intelligence business, stem from the new Payment Practices Reporting Regulations that oblige larger firms with a ‘Duty to Report’ their payment performance. The first tranche, which includes such names as Stagecoach Services, Center Parcs, and The Carphone Warehouse, had to report by 30 November 2017.

Philip King, Chief Executive of the CICM, says a snapshot of these firms reveals some alarming trends: “The biggest issue for many SMEs is not the length of payment terms but the certainty that payment will arrive when they expect it. Often, payment of a large supplier, the rent, or the wages are dependent on a large invoice being paid.

“If more than a quarter of invoices are being paid late then the suppliers are seeing a hole in their cashflow which is worrying, at best, and can be catastrophic. For many small businesses, it’s about more than just the balance sitting in the current account.” 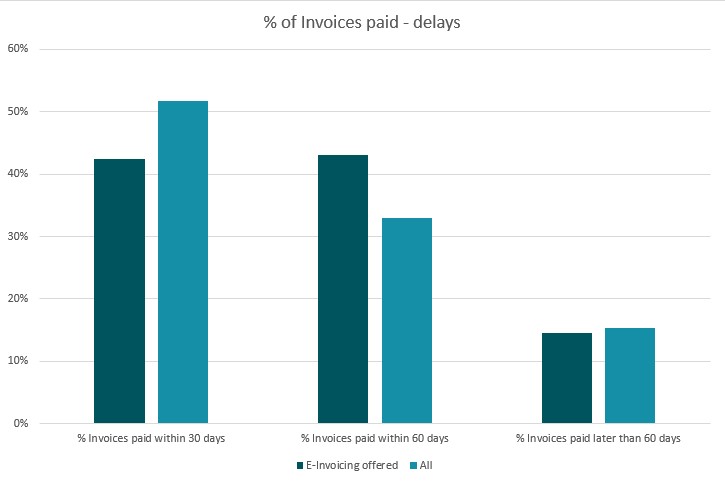 Mr King warns, however, that the figures do not always tell the whole story: “One company, for example, reports that zero invoices are paid late – which must be a good sign – yet the average time to pay is 69 days, and only 7% of invoices are paid within 30 days, which is far less encouraging. Its maximum contractual payment terms are 75 days.

“Contrast that figure with another company that reports paying 57% of invoices outside the agreed terms, yet 52% within 30 days, 28% between 31 & 60, and 20% over 60 days. Its average time to pay is 56 days. Which company is the better bet? How you interpret these figures is dependent on your point of view and what is most important to you.

“It is easy to draw conclusions that might be misleading – both good and bad. Sometimes you need to read between the lines.”

Mr King believes that the new Government portal (https://check-payment-practices.service.gov.uk/search) where all such future information will be available should help SMEs adopt best-practice credit management and get a more informed picture of who they are doing business with: “They can go into the relationship with their eyes open and, if the terms being sought are out of line with those reported, they will have good reason to push back and ask why they are being treated less favourably.”

The Payment Practices Reporting Regulations came into effect on 1 April 2017. Eventually, all of the approximately 15,000 large companies will be obliged to report on a half-yearly basis.

For further information and support on managing cashflow and payment, and if you plan to supply a business:

About CICM:
The Chartered Institute of Credit Management (CICM) is the largest recognised professional body in the world for the credit management community. Formed over 75 years ago, the Institute was granted its Royal Charter in 2014.  Representing all areas of the credit and collections lifecycle, it is the trusted leader and expert in its field providing its members with support, resources, advice, and career development as well as a networking and interactive community. In addition to its comprehensive suite of qualifications and learning opportunities, events and magazine ‘Credit Management’, the CICM administers the Prompt Payment Code for BEIS. Independently, and through collaboration with business organisations, it provides vital advice to businesses of all sizes on how best to manage cashflow and credit.