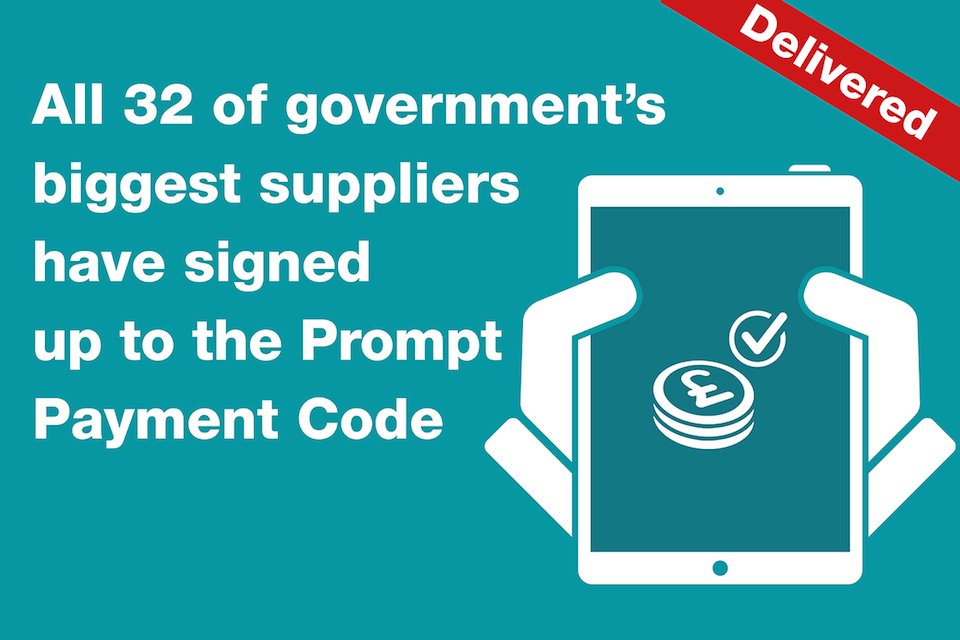 The Government’s biggest suppliers have signed up to a strengthened Prompt Payment Code that will help small businesses to be paid on time.

32 of the biggest suppliers to the government have voluntarily committed to pay 95% of invoices within 60 days – and to work towards adopting 30 days as the norm.

This fulfils a key manifesto pledge and will help the cash flow of small businesses. It is estimated that small and medium-sized enterprises in the UK are collectively owed more than £26 billion in overdue payments.

The signatories to the code are major strategic suppliers who typically have contracts across government of more than £100 million. Together they account for around 40% of government procurement spend.

Parliamentary Under Secretary of State in the Cabinet Office Caroline Nokes said:

This is a major boost to payment practices in the UK. Paying invoices on time is vital in providing healthy cash flow to smaller businesses, to help them survive and thrive.

We want the UK to be the best place in the world to start and grow a business, but the UK’s small-to-medium-sized businesses are currently owed over £26 billion in overdue payments. Such unfair payment practices hamper a business’s ability to invest in growth, and have no place in an economy that works for everyone.

It is only right that the government should lead by example, and it’s great to see all 32 of our strategic suppliers signed up and committed to fair payment terms.

The Crown Commercial Service (CCS) encourages businesses to sign up to the Code, which is administered by the Chartered Institute for Credit Management (CICM) on behalf of BEIS (the Department for Business, Energy & Industrial Strategy).

It is important to see that all of the government’s strategic suppliers are now leading by example by signing up to the Prompt Payment Code. The PPC allows suppliers to raise a challenge if they feel they are not being treated fairly by a signatory, and such challenges are proving successful not only in delivering payment but also in further improving practices and processes. It’s vital that businesses feel confident and have certainty that they will be paid on time, as well as having a route to challenge if they need to.