Those of you of who know me, will know that I am regularly to be found up a mountain – either in walking boots or skis – depending on season; so when a friend suggested we sign up for the Three Peaks Challenge (completing Ben Nevis, Scafell Pike and Snowdon within 24 hours, including the travelling between each climb), I thought – how hard can it be!

Reality dawned when the opening words of the Mountain Leader were … “you have signed up for a challenge, not a guided walk in the mountains” …….

I set off up Ben Nevis with a skip in my step in the blazing sunshine – this was going to be fun! This very quickly changed from fun to a relentless mission with a merciless pace – no views observed, no pictures taken – very little time to fuel and hydrate (what I used to call butties and a drink!) Straight down Ben Nevis and into the Mini Bus to drive to the Lakes for Scafell Pike – this is where intellectually knowing how far away Ben Nevis is – had not prepared me for how far it actually is!

We started the ascent of Scafell Pike at midnight – obviously in the pitch black – it was tough, having been sat on the minibus for 6 hours – legs have stiffened and realisation has dawned that you have to do this again (and then again) I wouldn’t have taken much persuasion to stay in the bus. Next stop Snowdon – just the 5 hours travelling. I felt relatively okay about going up the Pyg pass, as I have done it a number of times before – however, not at this pace and not having completed the other two with no sleep in between. I massively underestimated the emotional and physical challenge of this event – in hindsight I think my naivety helped me – had I known just how tough it would be, not sure I would have so brazenly entered!

My final time was 22 hours and 3 minutes, with all limbs intact (which I take as a result!)  The best thing was, having burned almost 10,000 calories – eating fastfood with chips was a dream! 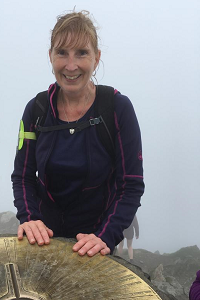