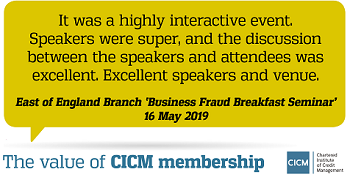 It was very nearly standing room only for the East of England Branch as Branch Chair Atul Vadher welcomed delegates from CICM East of England and London Branches, and a number of non CICM members to the branch’s inaugural breakfast event at Hays Chelmsford office. He introduced Branch Committee member Andrew Martin of hosts Hays.

Branch Member Liam Hastings of Hastings & Co Solicitors, talked through some interesting fraud case studies that he had handled and he gave useful advice on what to look out for before granting credit, and how to use various sources of information, including Land Registry, Companies House and credit circles. Liam knew that all at the meeting were aware of the necessity of ensuring that the debtor had sufficient funds before taking legal action against them but said that some of his clients needed convincing of this. He gave some tips on how to establish the means of the debtor.

Martin Eaves, Technical Director of Advanced Collection Systems, described the work ACS were undertaking with Hertfordshire University in using cognitive load verbal and non-verbal clues to detect lies in debt collection, both for real agents and for virtual agents. It was very possible to detect lies by listening carefully to the voice of the debtor, e.g. tonality changes, stuttering, hesitation, voice tremors, and the language used. AI was being developed for virtual agents which even picked up lies in text messages – an ever-increasing means of communication with debtors.

Both presentations were well received and led to detailed discussions around the table.

The breakfast seminar feedback from everyone who attended was exceptionally positive about the content, the speakers and the venue, and the Branch would like to thank Hays for their generous hospitality, and our speakers Liam Hastings and Martin Eaves for generously giving up their time to be part of the Branch’s first breakfast meeting.