Wednesday evening saw Sheffield and District branch embark on a pre-AGM team golf challenge at the Paradise Island Adventure Golf in Sheffield. Members and guests assembled straight after work for a 18:15 4 team tee off across the 2 available courses. As ever there was strong individual competition and team rivalry but plenty of fun and networking across our business areas. Once each team had completed their round it was down to the formal business of the AGM at our boardroom table set for us at the Proove Restaurant followed by refreshments and pizza.

The formalities of the AGM were conducted by branch secretary Myron Fedak and following a series of votes the committee for 2019 was approved and Paula Uttley, who had agreed to serve a second term, was appointed Branch Chair for a further 12 months. Following a review of branch activities in 2018 and the planned events for 2019 it was time to formally close the AGM and get on with the remaining informal business of pizza and prizes. After scrutiny of all team scorecards Carl Goodman was declared clear (4 under par) winner of the Branch trophy. Runner up was Richard House (4 over par) receiving a rather useful wooden spoon. 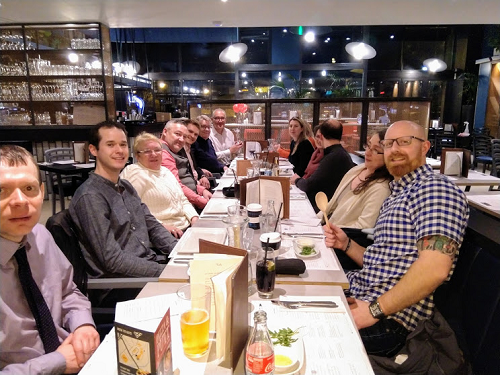